To The Youngest Among Us

Remember when Stevie Wonder said, “I believe the children are our future, teach them well and let them lead the way, show them all the beauty they possess inside.” No? Then you’re probably born during a time when soul became neo, when analog became digital, and house phones were instruments utilized by old Grandpas and Great, Great Uncles. Sometime between 1995 and 2010. 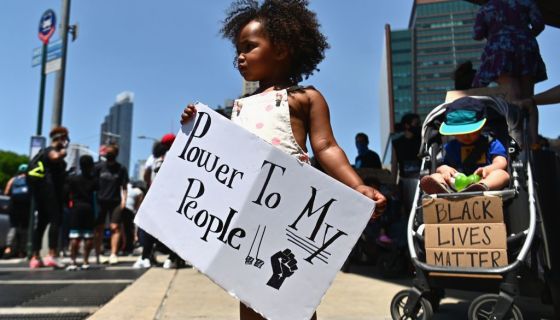 Indeed, while Stevie Wonder may or may not be on your playlist, you are literally living those words, so sweetly sang by Stevie all those years ago.  Some of you have witnessed the World Trade Center’s destruction at the hands of hate, while others have witnessed hate born before your most distant known American ancestors reach forward to strangle the country’s future with the election of a bumbling demagogue to the White House.

And now, as the Movement requires your energy, anger, sweat and blood, you burst forward and fill the ranks of activism that had been withered low by the attritions of age, energy, health, time, imprisonment, apathy and death.

You are a “Bout It, Bout It” Generation, yet another cultural reference that you likely will not catch the significance of, but your bold actions embody that as well.

The age-old cross-generational dance of disdain is a commonplace occurrence as population groups reach middle age while others enter adulthood. Generation X still has to deal with unfair stereotypes lumped onto us by Baby Boomers who couldn’t understand our disdain for the institutions our parents and grandparents still hold dear.  Because of this we still are labeled “cynical”, “abrasive”, “apathetic”, and “individualistic”.

But these were only outward responses to the internal turmoil many of us suffered through in a world that changed at the speed of light, while elders were still trying to convince us that things were fine as they are.

Oh, Mighty Generation of energy and purpose, 20 years ago much of the world looked at us in the same manner they look at you, with confusion, criticism and an unwillingness to allow you to gracefully step into your glory in a natural, orderly manner.  The resistance to change is commonplace the world over, and throughout history.

Societal norms, whether toxic or beneficial, are often embedded into a population group by the institutions they hold dear, and the officials who represent them.

The Difference Between Me and You

For us, after many decided to forego some of the societal norms of our parents, we aged, had children, and realized that concepts such as “seniority” and “experience” are potentially stagnating terms created and utilized to hold onto power and lock younger people out of access to power.

On the other hand, Xers introduced then foreign concepts such as “performance”, “productivity” and “merit” into the lexicon. These words decentralized age as a prerequisite for adequate leadership, but other methods were employed to extend the power of an older demographic at the expense of the younger.

The old norms regarding youthful recklessness and the austerity of old age die harder than a New York subway rat.

As Generation X once learned, so too will you. Words mean absolutely nothing without the power, dedication and will to bring them to fruition. Otherwise, those angst-ridden words ain’t nothing but a bunch of stankin’ ass air.

You’ve been lied on, and will continue to be lied on, by those who’ll deny your right to access the power they hoard. And they’ll employ every weapon at their disposal to dim your light and sap the strength from your will to fight. Voter suppression is but the most recent and well known of a quiver full of arrows with warheads specifically intended to pierce Black spirit.

Media scapegoating, straw man arguments regarding Black-on-Black crime, are all meant to confuse you, sidetrack and exhaust you.

During the recent explosion of activism and youth-based movements, media reports circulated the world regarding your willingness to take to the streets for civil disobedience in the name of George Floyd, Breonna Taylor and countless other Black lives whose blood paints the crimson stripes of Old Glory.

But your glory isn’t old, apathetic and weighted to institutions detrimental to your personal growth and ability to thrive in a land purposefully made toxic to your ilk. It is new glory that spurns you forward. New glory the likes of which your parents stopped believing was possible, the one your senior generation deemed impossible, and your grandparents deemed untenable.

Your overwhelming willingness to take to the streets across the nation shows you do believe YOU can make a change.  Your willingness to use the technological savvy more inherent to you than all others will only get better with time.

The overwhelming success gleaned from your coordinated trolling of Trump’s Tulsa campaign rally is indicative of your ability to organize, coordinate and execute a plan, while your finely tuned snark has been eviscerating your Millennial counterparts.

You know how our Boomer Generation parents and Silent Generation grands use to talk sh*t about us? Right to our faces! Yup, would tell you “Y’all ain’t sh*t” right to your face. That’s likely where some of our storied apathy and cynicism were born. As we square pegs were hammered in to round holes meant to coax conformity, so to will you.

They’ll make examples out of the loudest, either via elimination or recruitment, as to the futility of your cause. It’s going to be rough and nasty. But resist within your means to do so. Speak out, show up and show out!