Madison Square Garden is referred to as the “Mecca of Basketball“, but we often give that phrase a subconscious side-eye. After all, calling a thing Mecca would impart visions of a grand place where basketball is practiced at its highest level.

But the New York Knicks haven’t won an NBA championship in 47 years and St. John’s, New York City‘s only big-time Division I program is still struggling. But it wasn’t always that way.

At one time, New York City truly dominated the sphere of college basketball. A time when New York University, the City College of New York and Long Island University were considered national powerhouses, equal to any of the elites that currently rule the game.

Back in the day, the now largely ignored National Invitational Tournament was far more important than the NCAA Tournament. The NIT came into being in 1938 and remained more popular than the NCAA Tournament, which was created a few years later, for a little over a decade. Some teams even played in both the NCAA and NIT Tournaments. Colorado and Duquesne were the first teams to do so in 1940, but CCNY was the only team to win both championships in the same season.

New York schools participated in the NIT championship game at Madison Square Garden six times over the first 13 years of the tournament’s history; St. Johns University (twice), Long Island University (twice), NYU and CCNY. College basketball had not made the cultural inroads among a great deal of Americans yet but was increasing in popularity every year.

But there was another group of individuals gaining power as well. The Italian Mafia was at the height of its power during the time immediately following World War II and had its tendrils in many seemingly legitimate endeavors. Sports betting had been a big one for years, as was illustrated by the Black Sox scandal of 1919.  But to the American public, student athletics seemed pristine.

The scandal came to light on February 18, 1951, when City College of New York All-American Ed Warner, as well as guard Al Roth and center Ed Roman, were arrested at Penn Station by NYPD during a sting operation as they returned from a game in Philly.  The scandal would balloon to affect players at Long Island University, New York University, Manhattan College, University of Kentucky and the University of Toledo. 33 players in all were coerced by the Mob to manipulate the games in which they played for cash. 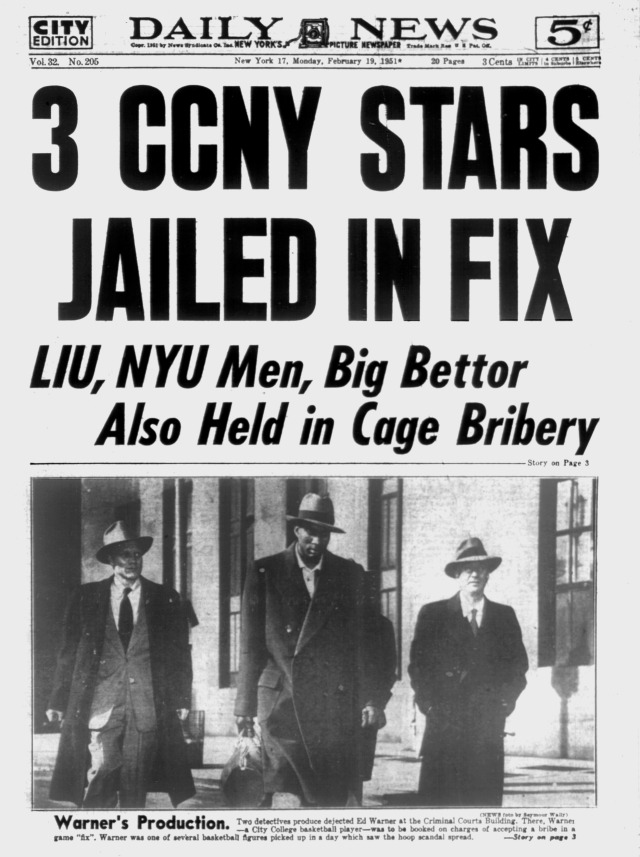 Most of the teams named in the scandal participated in the NIT, but it bled over to the NCAA Tournament as well, with players from Kentucky and Columbia University as well. Primary among these players was the 1951 NCAA Tournament Most Outstanding Player Bill Spivey. Though he was never convicted of a crime, Spivey’s award was rescinded and his dreams of playing the NBA were forfeited.

Although Jack Molinas of Columbia University was not implicated at the time, it was later revealed that he too participated in point shaving. He played for the Fort Wayne Pistons before the revelation of his deeds got him banned from the NBA. Molinas would be connected as a bookie to another NCAA basketball scandal in 1961, which implicated two Brooklyn natives who were exceptional talents, Connie “The Hawk” Hawkins and Roger Brown.

Molinas was convicted and sentenced to 10-15 years in the latter scandal but only served five years. He was murdered in 1975 in what was believed to be a mob hit.

Kentucky appeared to be affected the least by the blowup, canceling their 1952-53 season, but rebounding as a national power. All other programs tumbled from national prominence. City College of New York withdrew money from its athletic programs and downgraded to Division III. LIUs athletic department ceased operations for six years, downgraded to D-III and only returned to Division I basketball in the ’80s.

Other than Kentucky, Bradley is the only school involved that has appeared in the AP Poll as a nationally-ranked basketball program since.

The effects of this scandal completely destroyed New York City’s status as the Mecca of Basketball, as college administrators, most of them from middle America had visions of NYC being a rotten, crime-riddled cesspool of corruption.

The NCAA did not schedule any tournament games in the New York metro area until 31 years later, and that was in Long Island at the Nassau Coliseum in 1982. It wasn’t until 2014 that NCAA tournament games returned to Madison Square Garden. It was the first time tournament games were played in the Big Apple in 63 years.