A Shawn Porter training camp is always a study of contrasts.

It headlines a FOX PBC Fight Night from the Microsoft Theater in Los Angeles.

“Me and my dad have been working hard since April staying ready for this opportunity to get back in the ring,” said Porter. “Over the past couple of years, any time I step in the ring there are some new wrinkles to my game. We understand that you can’t fight one way against everyone, so you’re going to see some small, slight wrinkles, but I’ll always been an aggressive fighter. Once I smell that blood, I’m going for it. We’re excited to show off a different side of Shawn Porter.” 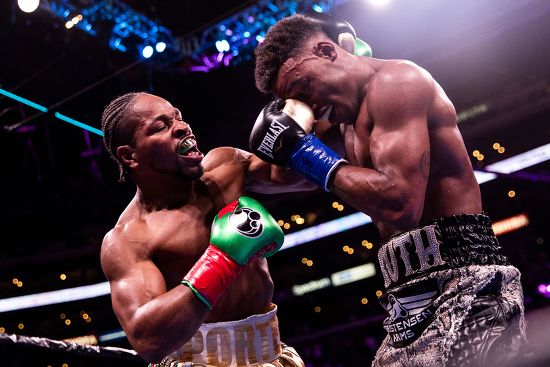 Porter (30-3-1, 17 KOs) returns to the ring after narrowly losing a welterweight unification showdown against Errol Spence, Jr. last September, in one of 2019’s best fights.

The 32-year-old has faced a slew of big names throughout his two runs as champion in the stacked 147-pound division. Porter’s first title was won in 2013 by defeating Devon Alexander, while his second championship came in a 2018 triumph over Danny Garcia.

Along the way he was beaten top fighters such as Adrien Broner, Yordenis Ugas and Andre Berto, while coming up just short in memorable showdowns against Keith Thurman and Kell Brook.

However, now with no fans in arenas and a lowered pay scale sans a live gate, Porter is fighting to keep the sport rolling.

“This is not a tune-up fight, no one wants to fight me. For me, I’m taking the responsibility of fighting in my hands for the game of boxing. He’s (Formella) not a tune up, he’s not a stay busy, he is the fight and according to my dad, this is the best camp we’ve had.

“I sparred with my dad for about three weeks because we didn’t know who was safe to bring in. We started training in April and we built out my dad’s back yard. He had someone build a rack with bags and everything. I don’t know how I’m going to feel without the fans but I don’t think its gong to be much different for me but thats how the Porter Way does it.”

Formella continued to rise up the rankings fighting in his native Hamburg, Germany, before capturing a regional title in 2018 by stopping Angelo Frank. He continues to ride his winning streak into his U.S. debut on August 22, having won three-straight 12 round decisions over Betuel Ushona, Thulani Mbenge and most recently Roberto Arriaza in January of this year.

“There are three keys to success for me to win this fight: patience, working the body, and setting him up.”

Porter sounds like he is still behind the desk of the now defunct Inside PBC Boxing analysis show that was an unintended casualty of the COVID-19 pandemic. Porter used to host the show with fellow champion Abner Mares.

“My heart went out to everyone that lost their jobs on FOX, but I think it will come back. I’m looking forward to it but around that time I started buying a bunch of podcast equipment. The Porter Way podcast is coming soon.”

With just hours remaining before stepping into the ring and beginning his quest toward becoming a three-time champion, Porter has a clear statement for the rest of the division.

“The statement is that I’m still here,” said Porter. “I’ve had three losses, but I haven’t gone anywhere. I’m still here fighting at an elite level and that’s what they’re going to see in this fight.”