This is part of The Shadow League’s Women’s History Month In Focus series celebrating excellence in sports, entertainment and culture.

Dawn Staley is the embodiment of women’s basketball and its incremental rise as a viable and marketable American sport. She has done it all. She’s in some way been an integral part of every watershed moment in women’s basketball over the past three decades.

Staley is a three-time Olympian, winning the gold in 1996, the catalyst tournament for the late 90s explosion of women’s athletics. After winning two National Player of the Year awards as an All-American point guard for the University of Virginia under legendary coach Debbie Ryan, Staley was a two-time All-Star in the now-defunct American Basketball League and then became one of the stars and influential pioneers of the WNBA.

In 2011, the fans voted Staley one of the Top 15 players in WNBA history and Staley was elected to the Naismith Memorial Basketball Hall of Fame in 2013.

Her leadership, unselfishness, ballhandling skills, relentless pursuit of perfection and groundbreaking style of play made Staley a perfect candidate for coaching. As the story goes, she was interested in coaching and the voices in her cipher were telling her it would be impossible to simultaneously play in the WNBA and coach D-1 college hoops.

Never one to back down from a challenge, Staley returned to her hometown of Philly and started coaching the Temple Owls near the end of her WNBA career and immediately proved to be a program builder. In six years at Temple, she had a 172-80 overall record with six NCAA tournaments, three regular-season conference championships, and four Atlantic 10 Conference titles. 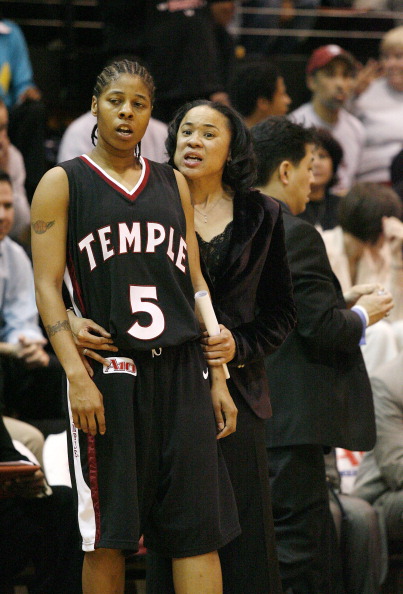 Searching for a greater challenge in the SEC, Staley took over a doormat South Carolina program in 2008. She molded it from scratch and impressed her full basketball personality on the squad. Nine years later Staley hoisted a national championship banner, and many say South Carolina has at least caught up to UConn as the powerhouse in women’s college hoops.

READ MORE: Dawn Staley Finally Cuts Down Her Own Net

The top-ranked Gamecocks finished 2020 with a 32-1 record and were poised to win another title before the COVID pandemic canceled March Madness for the first time ever. With uncertainty abundant and the pandemic still raging, the Gamecocks have been national contenders this season and are ranked No. 7 nationally.

Most recently Staley piloted the 2019 USA AmeriCup Team to a gold medal with a 6-0 mark in San Juan, Puerto Rico.

With Staley at the helm, the USA Basketball Women’s National Team earned a 6-0 record and the gold medal at the 2018 FIBA World Cup, which qualified the USA for the (postponed) 2020 Summer Olympic Games (July 24 – Aug. 9 in Tokyo, Japan). She also helmed the USA National Team as it compiled a 6-0 exhibition slate in 2018.

Staley has built USC into the pre-eminent program in the Southeastern Conference and with the death of Pat Summitt, Staley moved to the forefront as the iconic, fresh face of women’s college basketball. The only SEC national champion in women’s hoops history is Tennessee, which won the NCAA title eight times.

Staley is in the right place at the right time. She’s a giant who at 50 years of age is still relevant and still legendary in the eyes of anyone familiar with women’s basketball. UConn remains the formidable roadblock to South Carolina taking over the basketball landscape.

“Pat Summitt really transcended women’s basketball to bring in the casual male fan, fans of other sports”, said former college and WNBA coach Nell Fortner, who coached Staley on the 2000 Olympic team. “People were mesmerized by Pat. Our sport misses that, and we need it. For her to become that would be absolutely outstanding.”

Stanford coach Tara VanDerveer is familiar with Staley. The Cardinals beat Staley’s Virginia team for the 1992 NCAA title, and then VanDerveer coached Staley on the 1996 Olympic team. The pupil met the teacher in 2017 and beat Stanford for the first time in school history en route to a magical season.

In addition to her on the court exploits, Staley has been very vocal on social justice issues and a leader in the national movement to end systemic racism and gender inequity in sports and in life. Her vocality on these issues has ruffled some feathers in the old confederacy.

From her impact on women’s basketball culture to what she will accomplish in her recent appointment as head of the US Women’s National team, Dawn Staley remains a superstar and an evolving part of the fabric of women’s sports in America.  Another deserving champion to honor during Women’s History Month